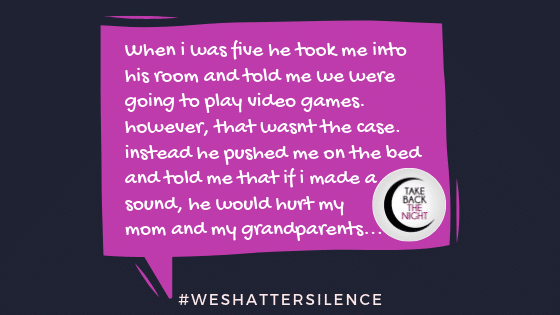 my dad left my mom when he found out she was pregnant, so since i could remember we had lived with my grandparents while my mom finished law school. a few years before i was born, my unlcle and his wife died in a car wreck and left their son “Kevin” in my moms care. i had grown up with him and he was like a brother to me. one day when i was five he took me into his room and told me we were going to play video games. however, that wasnt the case. instead he pushed me on the bed and told me that if i made a sound or told anyone, he would hurt my mom and my grandparents would no longer love me. this continued for about three more years. although we had moved out of my grandparents after i turned six, we still visited occasionally and on those occasions he would do it again. i didnt tell because i was afraid that my mom wouldnt love me anymore. my family is strongly catholic and abstinence was a big subject. it wasnt untill a year ago, when i was thirteen that my cousin, “Samantha” told my aunt that she thought she had seen him do stuff to me. my mom talked to me about it and asked me questions. when she brought it up i started crying, it was finally over. she wasnt mad, and she wasnt disapointed. i have been getting counceling for the past year now.

23 Years Old In Plano, TX | #WeShatterSilence | Let This Story Be Heard By Clicking...