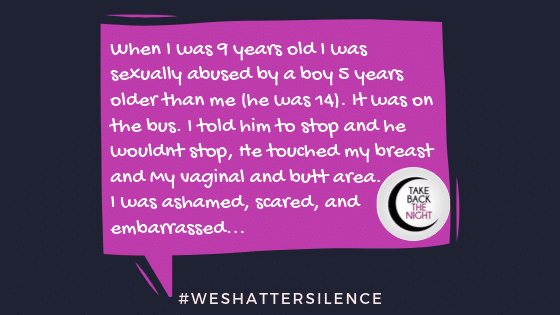 When I was 9 years old I was sexually abused by a boy 5 years older than me (he was 14). It was on the bus. I told him to stop and he wouldnt stop, He touched my breast and My vaginal and butt area. I was ashamed, scared, and embarrassed. I was ashamed because it sometimes felt a little good. I knew nothing about sex or anthing like that. I was only 9 and in 3rd grade! I didn’t tell my parents at all. It went on for about a year and a half.I had nightmares almost everynight. Dreams like me running down a never-ending hall, then he would catch me,pin me down, and rape me. I would wake up crying, but still was to ashamed and afraid to tell my parents. This went on for a year. I was terrified of the dark and began sleeping with my light on. So just incase he ever came to my house I could see him and scream. (in my 9 year old mind thats what I thoguht) When I was in 4th grade his brother made (blow job) hand jester to me. Some of the older girls seen this happening and told. Thats when everything came out, I told my parents everything. I felt a little better getting it off my chest. My dad someone I never seen cry, cried his eyes out. He was so deeply hurt. I was afraid of all men. Even my own brother and dad, who I know would never do anything like that and havent. My dad went to the juvinile and talked to some people there. They said it was my word against his, and he would probably just get off scott free. There was nothing that could be done. My dad went to the school that I was at (I no longer go there) and they told him it was a year ago and there was nothing they could do about it. Although it happened there. My parents didn’t want to put me through that kind of pain of watching him no get into trouble for the wrong he did. I still see him. I’m not over it. Everytime I see him I become that 9 year old little girl all over again. The other day I seen him in Wallmart, I froze up, grabbed my moms shirt, and broke down into tears. I cried from Wall Mart all the way to my grandparents. Non-stop. I still have dreams every great once in a while. Mostly just after I seen him. I hope I will get through this all. Thats why Im gonna start handing out poster and hopefully get people to help me pass out things and help people understand it! If I could keep even just one girl from going through what I went through, I would be satified! I want people to be educated! Or if they have been through something like this, To tell them not to be ashamed and their not alone like I once thought myself! You can make it through this with the help and love of people around you.

15 Years Old in Oxford, OH | #WeShatterSilence | Let This Story Be Heard By...

21 Years Old in Woodland, PA | #WeShatterSilence | Let This Story Be Heard By...
Scroll to top