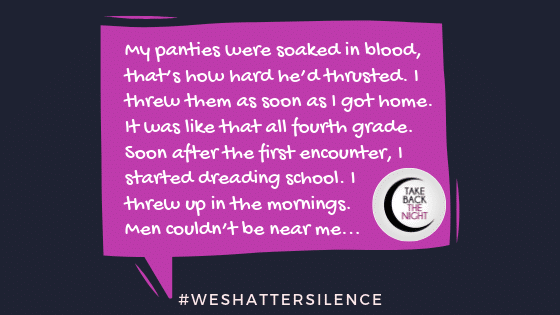 It has taken me nearly nine years to openly say it: I was raped when I was eight years old. It was my English teacher. I paid no heed to the nasty rumours that followed the man: “they say he likes sixth-grade girls” and so forth. One day, I’d forgotten my schoolbooks in the classroom, so I went to get them. There he was. He knocked me to the floor, covered my mouth, told me he’d kill my family if I ever told anyone. I still remember when he left me in the classroom. My panties were soaked in blood, that’s how hard he’d thrusted. I threw them as soon as I got home. It was like that all fourth grade. Soon after the first encounter, I started dreading school. I threw up in the mornings. Men couldn’t be near me because I’d start screaming and crying. He was dismissed at the end of the term. But … when I was a mere month before turning fifteen, he tracked me down and raped me again. This time, he brought “friends” and threatened to kill my father – if I was submissive, it’s only because he was pointing a gun at his temple. He isn’t in prison, but I now know he has no control over me. Most men don’t see me as only flesh and a hole where to ram it in, and I know that. I’m not disgusted by my body or by myself anymore. Counseling has helped so much, and I’m a volunteer at a local rape victims’ support group. So you see, things can have if not a happy ending, a refreshing and peaceful start after Hell is over.

35 Years Old in Tampa, FL | #WeShatterSilence | Let This Story Be Heard By Clicking...

23 Years Old In Plano, TX | #WeShatterSilence | Let This Story Be Heard By Clicking...
Scroll to top