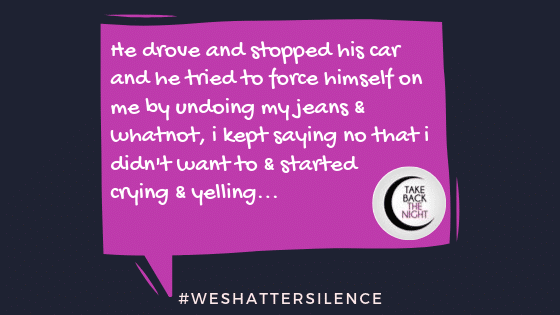 I was dating this guy during my junior year of high school who was a senior, we were driving around one night, he lived on the opposite side of town of me where it was dark and alotta of trees & not too many street lights. He drove and stopped his car and he tried to force himself on me by undoing my jeans & whatnot, i kept saying no that i didn’t want to & started crying & yelling it, he finally layed off & drove me home in which I remained silent & crying the whole way home. He brought me home & then forced himself on me again in his car in front of my house, I felt so weak bc he was bigger than me & I did like him but I didnt like him enough to have sex, after I went into the house that night, i felt destroyed, I haven’t told anyone about it since, its been over a year since its happened, and im still scared to come out about it today, & I cut off my connections with him for the past few months because he’s been nothing but a huge jerk.

16 Years Old in Wichita, KS | #WeShatterSilence | Let This Story Be Heard By...
Scroll to top