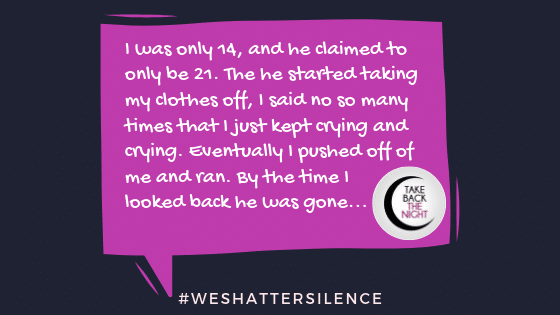 When I was a freshman in high school, I met “John”. He comforted me on the messenger I had on my computer. We talked all the time and I was going through a point in my life where I thought I could not live another day. He took advantage of this situation. He gained my trust after talking for 6 to 8 months, and then he had a brilliant idea. That we should meet. I was only 14, and he claimed to only be 21. Well, little did I know that my life was going to change forever after that night. He came to my house and my stepsister was home. I told her to go outside so me and “John” could talk. Then thats when he started taking my clothes off, I said no so many times that I just kept crying and crying. Eventually I pushed off of me and ran. By the time I looked back he was gone. I never told anyone till about 2 months later, when there was little evidence. The only evidence was the fact that I was pregnant. I had an abortion (i had no choice in this issue) and they used the fetus to match his blood. It turns out “John” was really 27, they charged him and he plead. There was not enough evidence to convict him of rape so he only got one year jail, but the important thing is that because the judge so how emotional i was, “John” became a registered sex offender. I wanted that, in fact, I needed that. I am now 17 years old and want to start the I club at my high school before i leave. I want students to be able to shatter the silence. I will never be the same, but i have grown. I lost friends, and gained friends

13 Years Old in Alhambra, CA | #WeShatterSilence | Let This Story Be Heard By...