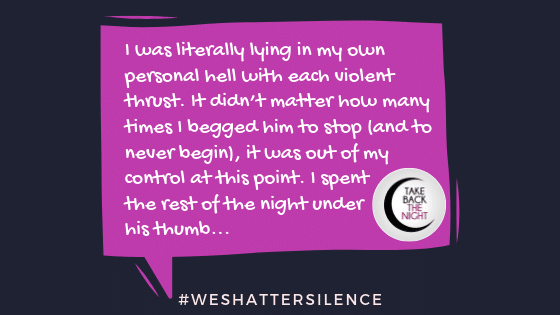 I was 16 years old and I will never forget it as long as I live. It was the first of two time I was to be raped within a year’s time. I was at a party with some friends. I was flirting with this guy that I thought was good-looking. A bunch of us decided that we would go to the hot tub, which was in view of the apartment we were hanging out at. This guy I had been flirting with (I don’t even know his name) was letting me borrow shorts and a shirt to go in the hot tub with. Afterwards, I went back to his apartment to get my clothes and change back. Suddenly I found that there was no room I could escape to in order to change in privacy. Before I knew what was going on, I was on my back staring at window blinds in shock of what was going on. I heard the sounds of laughter outside the window. I was envious of those people having fun while I was literally lying in my own personal hell with each violent thrust. It didn’t matter how many times I begged him to stop (and to never begin), it was out of my control at this point. I spent the rest of the night under his thumb in front of all the guests. He told me that if I didn’t do what he said at all times, he would tell everyone that we had sex at his place. I was mortified and didn’t want anyone to know what just happened, so I obeyed. Not only did this man take away my trust in everything by raping my body, but also stole my dignity in front of everyone that night. Every time I drive by that complex, even 7 years later, I want to scream at the top of my lungs. He will never realize what he did to me. Finally, at 23, I am able to say that I have let it go as much as possible. I still cannot trust men and I still fight the feeling that he left me with… that all I am worth is sex. I cannot hate him for it though. I pity him. I know that I must keep going on with my life, otherwise he has won by taking everything from me! I never reported my rape. I never told anyone about it until I was almost 21. It is not an easy burden to take on yourself. Don’t let hate consume you, as I let it consume me for 4 years after my rape.

17 Years Old In Laredo, TX | #WeShatterSilence | Let This Story Be Heard By...

14 Years Old In Carrboro, NC | #WeShatterSilence | Let This Story Be Heard By...
Scroll to top