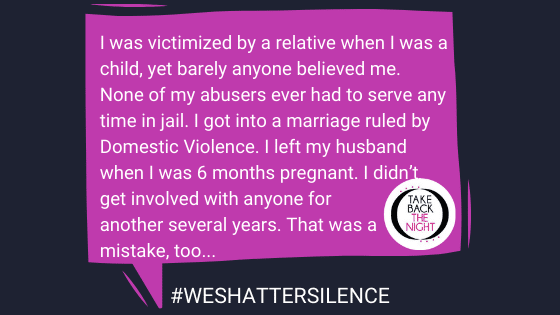 From an early age, I was subjected to sexual abuse. I was victimized by a relative when I was a child, yet barely anyone believed me. None of my abusers ever had to serve any time in jail. I got into a marriage ruled by Domestic Violence. I left my husband when I was 6 months pregnant. I didn’t get involved with anyone for another several years. That was a mistake, too – he became very violent and I left him only about a month or two after we started seeing one another. It was only a few months later when I was raped. The only way I can prosecute him is if I show up HIV+. Thank God I’m negative, but I haven’t been with anyone since then. I now volunteer with Survivor’s, Inc. and am on the Board of Directors for the same organization. I am currently a college student and trying to get TBTN and DVA Nights started here. I also write poetry and wrote a song called “Take Back The Night” which I perform yearly. I have nothing to hide and only want to help other victims find their voice. There’s more to my story, but not enough space here to tell you. Bless you for having this site and for helping others!

18 Years Old in Orlando, FL | #WeShatterSilence | Let This Story Be Heard By...

6 Years Old in Australia | #WeShatterSilence | Let This Story Be Heard By Clicking...
Scroll to top