Read the inspiring and powerful stories of survivors of violence and abuse. Are you a survivor wanting to learn about your legal options? Visit our Justice Hotline webpage. 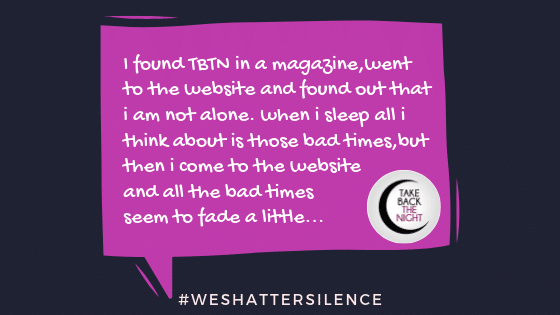 Let me just say that i was raped by my stepfather as well and now im not only scared 4 life im terrified to walk out my front door,to walk to a friends house, and even to let my boyfriend kiss me.i found TBTN in a magazine,went to the website and found out that i am not alone. when i sleep all i think about is those bad times,but then i come to the website and all the bad times seem to fade a little. So i just want to say.. THANK YOU TAKE BACK THE NIGHT websit U LET ME SEE THAT I AM NOT ALONE IN THIS FIGHT. AND TO ALL U OTHERS OUT THERE U ARE NOT ALONE IN YOUR FIGHT!

When I was young, in third or fourth grade, I went to the doctor. I honestly can’t remember if the doctor was a man or a woman, but I remember that (s)he sexual abused me. My parents were not in the room for some reason. I don’t remember the extent of what happened, only the beginning of it. Somehow, I think it was a female doctor, but again, I’m not sure. Aside from this, I’ve told one person. When I was 15 or 16 I was sexually abused by my dad, he didn’t rape me, and it only happened once. I never told anyone but a few close friends. Never my best friend, she’d have taken action. I have an OK relationship with my dad now, I see it pains him to remember it whenever we’re around each other. A few months ago I took my girlfriend to see her friends and family in her hometown, and one of her friends got her high and tried to rape her. He molested her and by the time I got to where they were I could see that she was terrified. It was pretty terrifying for me as well, getting her out of there. Telling him no and pulling her away from him. She was so high she could barely function. She made the decision to do drugs, but she never made the decision to be a sex toy. There was another girl there, and after I took my girlfriend away from the situation and got her sobered up, we went back for her. I wish we’d gotten there sooner, but we managed to get her out too. It was the worst of three similar instances. It was discouraging to me because I felt that if I had been a guy, or it had been a boyfriend there instead of her girlfriend, those guys would have been hesitant to try anything. We’re just friends now for other reasons, but I know she still thinks what happened was her fault. It wasn’t and I’ve told her so. She made a bad decision by getting high, but she didn’t deserve what happened to her. It still scares me whenever I date that I won’t be able to protect my girlfriend or myself because I’m a woman. 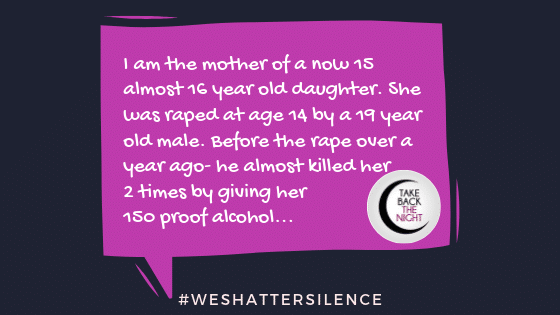 Hello. I am the mother of a now 15 almost 16 year old daughter. She was raped at age 14 by a 19 year old male. Before the rape over a year ago- he almost killed her 2 times by giving her 150 proof alcohol. He also gave her her first taste of marijuana. I am writing this now because I just heard from the prosecutor’s office that the verdict is NOT GUILTY. You see,we have gone through so much and have waited a long to hear the bad news. The bastard who did this to her is not guilty according to the law of the land and free to go out and do this again and worse. When I entered the country I am from just now- I was ashamed to enter USA. I am 53 years old, and had never been to a court trial or hearing before. And,especially, never a witness for my baby daughter. And now, instead of a court system that I had previously had faith in, my daughter and I and my family have been re-victimized and re-raped by this very court system. The charge of rape had been reduced by the grand jury to indecent conduct with a minor. This decision had disturbed and confused me at that time of the decision. But, you know, I never stopped hoping and expecting that there would be justice in the end. And, now I was proven wrong. I don’t know how to tell my beautiful, brave daughter that the court did not decide in her favor. I won’t tell her how angry I am and how it feels like “justice” spit in our faces. I now believe that if I and my family was rich and/or had power in this stinking county that the trial was held in, I would not be writing about my disappoint now. I am bitter and mad and feel totally powerless to do anything else about it. My advise to any and all who might be wondering if they should remain silent is that silence only gives the bastards more power and makes them laugh at us. He will be laughting at us when he hears the verdict. But, in the back of his mind, he will always know the truth and know how brave my daughter is for standing up for her rights. He forever scarred my daughter by taking away her innocence. But, I do know he will ultimately be punished by God-the higher power than this fool of a judge, grand jury members, and prosecutor. To all of you who failed us- I am so glad we are able to rise above you. My daughter will be OK in spite of you. My daughter will be rewarded for all the s__t she has gone through by a joke of a legal system I no longer have faith in. Thank you for listening out there. And, God Bless you all who have been wronged by ones we had trusted and who should have done something about all the pain instead of causing us more pain. 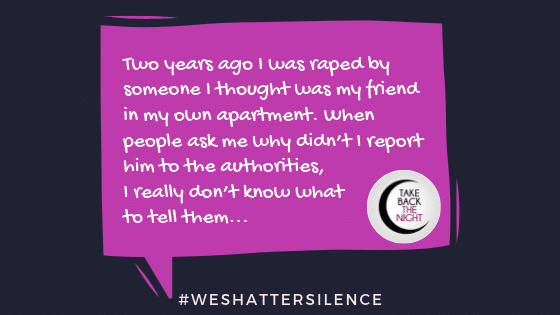 Two years ago I was raped by someone I thought was my friend in my own apartment. When people ask me why didn’t I report him to the authorities, I really don’t know what to tell them. I guess it’s because there was a part of me that blamed myself for what happened. I was the one who let him come by late that night. For days my apartment reeked of his cologne. The smell would turn my stomach every time I entered my home. He had violated my body and my personal space. I lived in fear for months wondering if I would come home from work one day and he’d be at my apartment. Thanks to my family and friends I feel more open to speak up about what happened to me and I no longer blame myself for what happened. It saddens me that sexual assault is such an epidemic and that it is a crime that is treated so lightly by many people. I hope that there will be a turning of the tide before long. 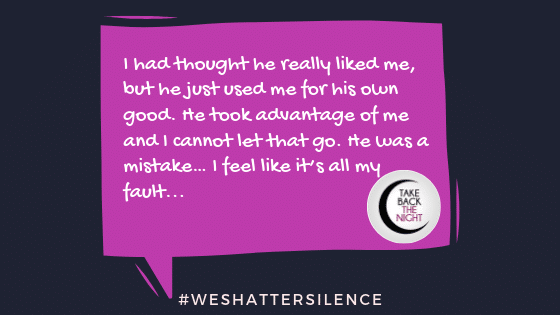 I had been talking to a guy that had been introduced to me through a friend back in May 2013, and I thought he was perfect. We had never met in person, but I was slowly starting to like him. His hair, the way he talked to me; sweet and polite. Everything about him I liked. My heart had been broken before, but I trusted him. At first, things were good. But pretty quickly, I was getting nervous when I talked to him. He asked me if he could come pick me up and he could have sex with me. At first, I said nothing. I just changed the subject or said I was too scared. Soon, his pleads got more frequent and I knew he had a temper and I was beginning to get scared. So I said, “Sure. You may come over, but we aren’t going to have sex”. Those words exactly. So he came over and we went down to my room to watch Netflix but all of the sudden, when I sat in my bed (fully clothed) he took off his pants right there and I just acted like I didn’t notice. He got in my bed and under the covers, I was on top of the covers. He coaxed me under and this was when I started to get scared. I closed my eyes to keep from crying, but then he kissed me hard. I didn’t know what was happening, it was like I wasn’t myself. Before I could do anything, he started fingering me and I tried to pull his hand away, but he was too strong. He got on top of me so fast I didn’t know what was happening. He forced himself inside me and his tongue was so far down my throat I couldn’t make a sound. He had me to where I could not move no matter what I tried. He never asked me for sex. He never asked me once if he could do anything he did. Ever since then, I have to watch my back everywhere. I do not hug people, let them touch my hair, or touch me anywhere from behind unless I tell them they can. I still have nightmares about it and every time I see someone who even looks similar to him, I start getting uneasy. I am going to therapy for it, but it still won’t help the fact that it happened. He told me I was beautiful, he made me trust him. I was just naive enough to believe it. I had thought he really liked me, but he just used me for his own good. He took advantage of me and I cannot let that go. He was a mistake… I feel like it’s all my fault.

Are you or a loved one a victim of sexual violence, rape, or other forms of abuse? Call 567-SHATTER or complete the form below.