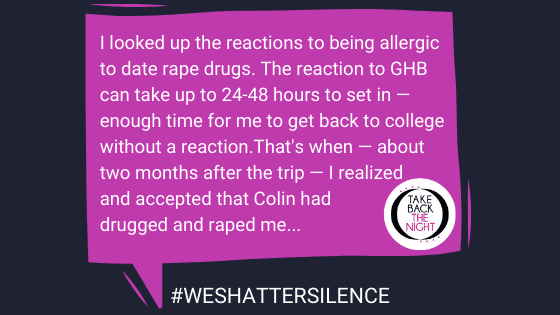 We Shatter Silence Story from Atlanta

I wanted to see the aquarium.

The first person that ever saw my bare chest was Jimmy.

It started off as playful kissing and after saying no a few times, he forced my shirt up so he could see my chest. I laughed and ran away.

Jimmy was the son of my dad’s best friend.

Parents that are best friends, they make their kids hang out.

They have always lived far away, but we would visit them in the summers and attend large family gatherings.

There was a party and that’s the first time I met Jimmy’s cousin Colin. I was 14, Colin was 18.

The first person that ever offered me a drink was Colin. We were standing in the side yard with a bunch of kids and he offered me a drink. I said no because my little brother was standing right there and I’m too stubborn to fall into peer pressure. Years passed. Colin would comment on my Instagram posts, text me on my birthday, ask when I was coming to visit again — all very innocently.

I liked the attention.

When I was a sophomore in college I was feeling adventurous with the freedom of college and a little money in my pocket. I told Colin I wanted to see the aquarium where he lived because it was the largest in the country. I bought a plane ticket. He bought us aquarium tickets. I was 19, Colin was 23.

He was a family friend so I figured it would be fine. My dad knew I would be there — we even scheduled lunch with his best friend, Colin’s uncle so I could see him while I was there. Colin picked me up from the airport and we had a very easy-going day and a half with the aquarium, exploring, and trying new food. Anytime I picked up my phone, he told me to stop texting my friends and pay attention to what was happening with him.

When it came time for sleeping, he said to share the bed with him. I said no to the offer on both nights and slept on the floor. When I showered, I took all my clothes in the bathroom so I didn’t have to walk around in a towel. I didn’t bring flirty clothing with me. We went to hang out with his college friends — guys and girls. We watched football, ate Chinese food, played frisbee, and made a last minute decision to go see Andy Grammar and O.A.R. Colin offered to buy my ticket, I refused and paid for myself. Sitting on the rooftop bar above the concert venue, I used my fake I.D. to get myself a Blue Moon.

I felt so cool.

Everyone in the group went down to the concert, Colin said to stay with him for one more drink. He sat across from me, and told me he wished I lived near him because he would date me in a second. I rejected that notion and friend zoned him.

He seemed to take it well. We walked downstairs and found the group we came with.

The next time I had a glimpse of consciousness, I had fallen off the back of a barstool onto my back, and the bouncer was kicking me out.

We left and went to four different bars, all using my fake I.D. I have no idea how I got in. I don’t remember anything.

The next morning Colin dropped me off at the airport. I went to the bathroom after I got through security, and it hurt as I peed. I texted Colin and asked if we had sex. He said yes. I was very confused. I flew home, told my dad it was a great trip and drove back to college. I was at college for a few hours when my hands and feet started to swell and I broke out in hives. I went to MedExpress and got a steroid shot.

It didn’t help. My hands swelled so badly that I couldn’t sign my discharge papers at the ER later that night after more allergy medicine and steroids. Days passed. A glimpse of consciousness came back to me. I was on a futon with Colin over me, forcing himself into me. I sat up, grabbed my jeans, and walked into the bathroom.

Did that really happen or was that just a dream?

Days or weeks later, I was in the mall when an O.A.R. song started playing and I burst into tears and had to leave. I didn’t know why. In the weeks that followed, I started drinking a lot. I started blacking out a lot. But no blackout was quite like that night with Colin. I started to realize that the night with Colin wasn’t a normal blackout.

I looked up the allergic reactions to date rape drugs. The reaction to GHB can take up to 24-48 hours to set in — enough time for me to get back to college without a reaction.

That’s when — about two months after the trip — I realized and accepted that Colin had drugged and raped me. I went home for a weekend and told my dad.

He punched the kitchen counter and then walked over and hugged me.

My dad called his friend and yelled. Colin’s dad called my dad and said he would force Colin on a plane to come up, and apologize to me.

I said no. I never wanted to see them again. My dad refused to travel to that city, not even for business.

I didn’t eat Pho for years because Colin taught me how to eat it. I cringe when I see a Mazda Miata.

I can’t listen to certain music from that weekend (even though I don’t remember hearing it).

When I got my wisdom teeth out at 23 years old, I was allergic to the fentanyl. Fentanyl allergies are related to GHB allergies. It’s been about 5 years. I still live with it every day. I still question myself.