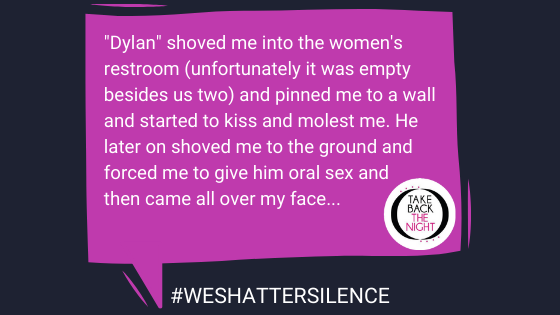 When I was 12, I had a crush on an older boy “Dylan” who was in choir with me. Every rehearsal, I would try to give him a nice smile hoping I would get his attention. Unfortunately, I got his attention. One day during rehearsal, he walked over to me and told me that I seemed cool and he wanted to be friends with me. He told me that if I asked the conductor to go to the bathroom, and after me, if he asked to go to the bathroom, we could both sneak out and “make friends” with each other. Hearing this from him made me feel so cool. I thought I was going to hang out with an older kid and have fun, so of course I said yes. After that, we both asked to leave at the same time, and as we were walking out, “Dylan” shoved me into the women’s restroom (unfortunately it was empty besides us two) and pinned me to a wall and started to kiss and molest me. He later on shoved me to the ground and forced me to give him oral sex and then came all over my face. After what happened, during the same year he stalked me and crept around my house. I hope that one day I can lift this feeling of uncleanness and shame off of my shoulders once and for all.