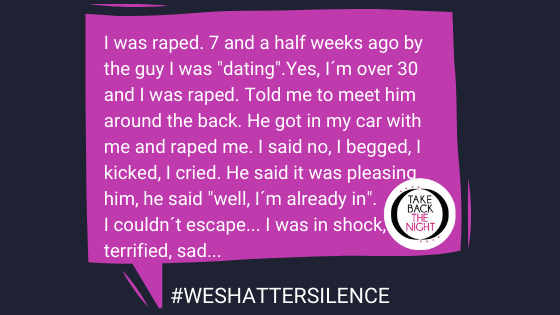 I was raped… Seven and a half weeks ago by the guy I was “dating”. Yes, I’m over 30 and I was raped. I trusted him and felt “safe” around him. He had been extra kind that night, super attentive… We had been together before and it was always fun, until that night… He was working at a concert and I was there for fun, and to see him, because it was a beautiful full moon night. I knew he worked late so I told him I was leaving, and he walked me to my car. He told me to meet him around the back. He got in my car with me and raped me. I said no, I begged, I kicked, I cried… He said it was pleasing him, told me “Well, I’m already in”… I couldn’t escape. I was in shock, I was terrified; I was sad… How could he do this to me? I’ve tried to understand why, but I know I’ll never have an answer… I’ve been trying to pull my life together these weeks… When someone asks me how I’m doing, I wonder if they really want to know. Everyone thinks he’s so great, a local war hero… ha! I didn’t report it… I felt likeI had everything to lose. I believe in the power of sharing our stories of healing and I believe in fighting this f*cked up culture together. I don’t want to be silent even if I’m scared.