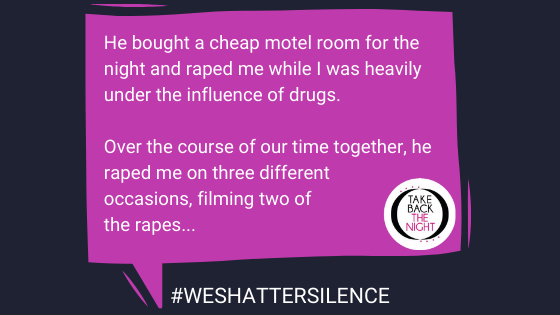 I met Justin in Alcoholics Anonymous. I was 19 years old at the time. He was in his mid-thirties. At first he showered me with positive attention, like the attention I wasn’t getting at home. While it seemed nice in the beginning, when I look back, I realize he was grooming me. Things progressed very quickly in our “relationship”. Lovely texts soon became demands for sexual pictures and videos. He would force me to do these things for him through coercion and manipulation. If I didn’t give him what he wanted, he would just ignore me or make me feel bad about myself.

We didn’t just have an online “relationship” though. We eventually met up when I went away for college. He bought a cheap motel room for the night and raped me while I was heavily under the influence of drugs. Over the course of our time together, he raped me on three different occasions, filming two of them.

I was only able to get away from him when I started dating my now deceased fiancée Kyle. During the course of that relationship, I found out that Justin had shown the videos of my rapes to other men in AA. I found out about this through a friend who also attended the fellowship. Justin was not my only rapist, but he was my first attacker. He took my virginity, self esteem, and self worth. I feel very angry and stupid to this day, especially since he got away with everything.

Even though he took so much from me, I have to remember that I’m a survivor. I just fell victim to a predator.