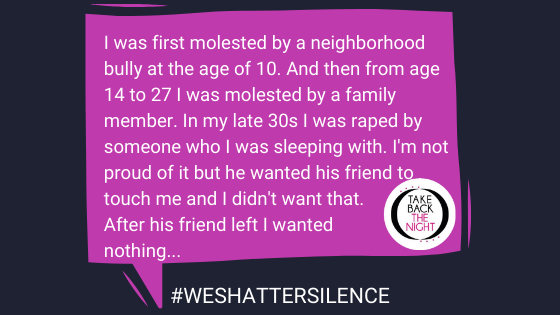 I was first molested by a neighborhood bully at the age of 10. And then from age 14 to 27 I was molested by a family member. In my late 30s I was raped by someone who I was sleeping with. I’m not proud of it but he wanted his friend to touch me and I didn’t want that. After his friend left, I wanted nothing. But he started touching me and I said no, but he wouldn’t stop and I froze up. Last year I was raped again by somebody else. I already told him no. I wanted nothing more from him but he still came over and raped me. He pinned me against my bedroom wall and I kept telling him no. He was much stronger than I was. He locked my bedroom door and wouldn’t let me leave. I told him I didn’t want to get hurt but he said nothing. He then pushed my back to the bed and pinned me down on the bed and I kept telling him no. I told him to go f*** his f****** wife which was his girlfriend he was living with. He acted as though he didn’t hear me nor did he care. He still raped me after I kept telling him no. Eventually I froze up. I didn’t cry, I did nothing. He even almost choked me but he did stop after he realized I struggled to breathe. He even apologized for the almost choking me. He started pulling my shorts off. I wanted it to be over. I wanted him gone. It was over quickly.

Afterwards he acted as if nothing happened and it felt like it didn’t happen. After he left, it started going through my head and I still don’t even want to think about it. I know no means no but I still felt like I deserved it because I didn’t love him. He didn’t care about me. I guess it was the only way that get me to realize that he was heartless and I have to keep him away. Nothing was ever done… I filed charges but the cops didn’t believe me because I slept with him before so there’s nothing else I can do but to try to get healing for myself from my childhood and from last year. I still blame myself even though I know the truth. I feel like I’m never going to be believed again. I can’t trust anybody but I still have hope because I have to take care of my son. One day it’ll all be behind me. I will live a better life and my past will not affect me as it does now. I may not trust anybody right now; I am afraid to get close to people. I have triggers and fear for so much but one day it will all be behind. I don’t know if I’ll be able to tell the full story of what happened last year because of the shame… A part of me still not ready to process what happened. All I know is that I said no several times and he wouldn’t let me go. I may have not been threatened or being beaten but he wouldn’t let me go.

In court, I had to speak in front of people and I felt scared and humiliated. I felt like I wasn’t believed so I must have deserved it. I felt like it doesn’t matter what I thought. I’m in  intensive therapy for suicidal thoughts. How dare I think that way because I have my son, we are all each other have, so I must stay alive. I won’t let them win, and I will not be silent.

No means no!!! I did not deserve that.