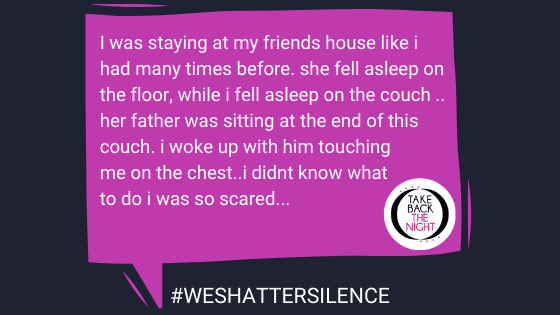 I was staying at my friends house like I had many times before. She fell asleep on the floor, while I fell asleep on the couch. Her father was sitting at the end of the couch I was sleeping on. I woke up with him touching me on the chest. I didn’t know what to do. I was so scared. I was thinking to myself, if I yell he may turn violent, so I sat there and prayed to God that this would end. I was screaming so loud inside but no one could hear me. He reached his hand lower onto my body. He got to the lining of my pants and I pretended to shift in my sleep. It worked. He moved his hand back up to my chest but now his body was moving. I had no idea what he was doing. He was grabbing me harder on the chest now, and then I realized he had been masturbating. Tears were pouring from my eyes. I tried not to let him see and to still pretend to be asleep. He left the house when someone called shortly after. I broke down when he left. I didn’t tell anyone though, not until recently. I don’t dare tell my friend though. I’m too scared she will hate me. I still don’t understand why this happened to me, or what I did wrong. I don’t want to feel what I am feeling now. That night something inside me changed; it is like an innocent part of me died. Any child like feelings I had left me that night. And reality struck me.