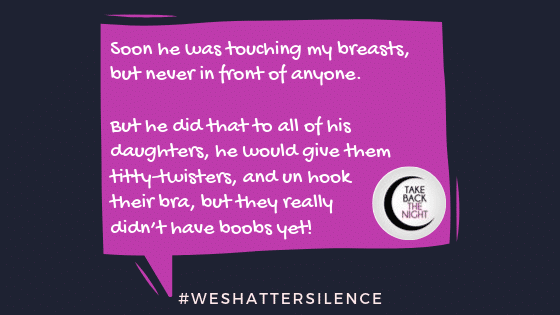 I was 14. I had a best friend. I loved her very much. She had 4 sisters and 3 were triplets, all aged 10. 1 sister aged 11 and my best friend was 13. She was a year younger than me. Her family was like my family. I went to all family reunions and everything, and since I do not know my dad I was very close to her dad. But he wanted to be closer. I would spend the night in their house all the time, every weekend and I would usually be over there on weekdays from when school ends till about nine o’clock.

At first he would look at me weird and wink, and hold my hand and kiss me on the lips. He would always cuddle with me and acted really nice. Since I had never had a real dad that I was really close to, I just figured it was normal, and I let it go. Soon he moved on to touching my butt and waking me up in the middle of the night to give me a kiss. He would rub my face.

Soon he was touching my breasts, but never in front of anyone. But he did that to all of his daughters, he would give them titty-twisters, and un-hook their bra, but they really didn’t have boobs yet!

He never did that to me but one day my best friend and I were sitting on his lap, and he told her to un-hook my bra, however, my bra was hooked in the front! I was wearing a tank top so if my bra came undone they would fly out!! He was holding me down and she was trying to un-hook my bra. I had been telling her what he was doing. She told me to tell him to stop but I was scared. While she was trying to get my bra undone, she noticed he was looking down my shirt and so she stopped. She told him she couldn’t get it! He looked diappointed. She told me to slap him and tell him to quit but I did not know how he would react. I did not know if he would think I was stupid for thinking that he was trying to make a move on me..

Soon, he was sticking his hands in my pants, on my butt and on my thighs, trying to make his way to my vagina but I stopped him every time. This was constant and very annoying. He would walk me to bed and ask me to lift my shirt or pull down my pants, and I always said no. I was not sure what to do. I never told anyone. I always pretended to be sick or asleep so he would leave me alone. Sometimes my ruse worked, and sometimes it didn’t!

One weekend we walked to a pizzeria, because he was the manager and he had the keys, so he could get free food. And he kept asking me if he could stick his hand down my pants and I said no a million times, but he was drunk. It was no excuse though. He kept asking me why and I told him it was because I loved him and his family.

I remember his exact words! He said “You’re right, I am a dick, I am sorry please forgive me.”

After that no more than 10 minutes later,  he asked me again and I said no!

About a week later my friend left for Cincinnati to spend the night with her grandma, however, I spent the night over there anyways! The next day, he woke me up and asked me to lay in bed with him, and watch a movie, and that was really normal. However he was asking me again if he could stick his hand in my pants and I said no again! While we were watching the movie, one of his hands was next to me and the other one was down in my pants fingering me! It scared me to death. There were footsteps coming up the stairs, so he quit. I can remember the look on his face, and it still haunts me! I wrote my other friend a letter at school explaining what had happened, however, I did not have the guts to give it to her, so i brought it home with me!

The next day, I went ice skating with all of the girls and him. When we got back, I got a phone call, it was my stepdad. He was coming to get me and he was mad! He had went into my room and read the letter! I had to tell my friend that I couldn’t see her anymore and why I couldn’t. She told her mom and while he had already cheated on her 3 times before that she knew of, she decided to believe him! He refused to take a lie detector test. I had to get an exam and 4 sessions of counseling. I had to go in front of a grand jury, yet they didn’t convict him because of lack of physical evidence! He is still walking free today!