16 Years Old in Terre Haute, IN | #WeShatterSilence | Let This Story Be Heard By Clicking Share 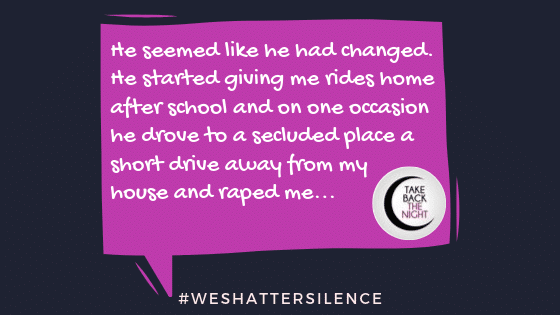 We Shatter Silence story from Terre Haute, IN

When I was a freshman in high school (I am a junior now), one of my ex-boyfriends transferred to my school. I had dated him for 3 months a couple of years before and he had been violently possessive. We started hanging out again because he seemed like he had changed. He started giving me rides home after school and on one occasion, he drove to a secluded place a short drive away from my house, and raped me. I still talked to him at school and stuff, but I was scared of him and did not want to be around him.

During summer break, he stopped by my house when my mom was not home. I had been getting ready to get in the shower and told him to wait on the front porch while I went inside and changed into some clothes instead of my robe. He followed me back to my bedroom instead and shoved me down on my bed. He was attempting to rape me again, when my grandfather walked in. He threw my ex boyfriend out of the house and told him not to come in, then told my mom that he had been there. My whole family decided that since I had slept with him while we were dating, he did not have to take no for an answer. He recently got busted for raping a 14 year old girl, and she asked me and a friend of mine (who he also raped) to be at their court date.