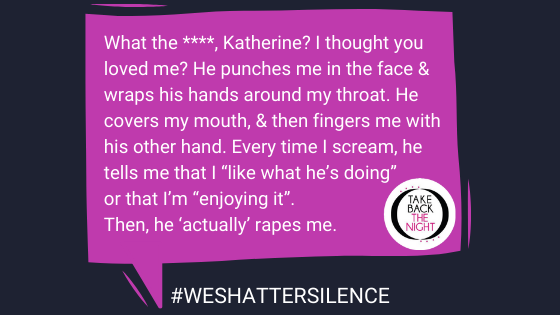 We Shatter Silence Story of a 21 Year Old Survivor

I was 19 when this happened to me. I was at my friend Mike’s house watching a movie. While I was watching the movie, he leaned in and kissed me.

I didn’t know what to do, so I kissed him back. He tried to kiss me again, but I refused and told him that I was just there to watch the movie. “Oh, come on! I know you want it”, he said as he started kissing me more. I kept asking him to stop. Then he started kissing me “passionately” and touching my private parts under my clothes.

Before I can yell at him, he was on top of me – holding me down as he tore my clothes off of me. “Don’t worry, I know how to do a girl right”, he said as he took his pants off. In that brief moment while he’s not on top of me, I tried to run out the door, even though I’m half-naked.

He grabbed me by the shoulders, and started screaming, “What the ****, Katherine? I thought you loved me?!?? You kissed me back, didn’t you?!?” and then he threw me down onto the couch. He punched me in the face and wrapped his hands around my throat. He got back on top of me, covered my mouth, and then started to finger me with his other hand. Every time I screamed, he told me that I “liked what he’s doing” or that I was “enjoying it”. Then, he actually raped me (forcible sexual intercourse).

When he was done, he spat in my face, and put his clothes back on. He called me a “dirty little wh*re” as he left me there crying in the fetal position. After he was gone for a few minutes, I hurried and put my clothes back on. I ran out of there as fast as I could.

I never talked to him again after that. I drove myself home and took an extremely hot shower to try and clean himself off of me. I didn’t go to a hospital because I was terrified that he would somehow come after me and rape me again.

I did tell the bishop of my church about it and the bishop asked me a bunch of sexual questions, probably to find out if it was “really a rape case”.

“Did you get s*xually aroused?”

“What clothes were you wearing?”

“Where did he touch you?”

“Did he do/use other things to arouse you?”

“What position were you in when he penetrated you?”

I was completely appalled by that and stopped going to church because of it.